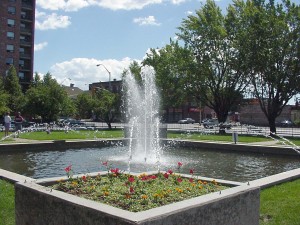 Fort William was a city in Northern Ontario, located on the Kaministiquia River, at its entrance to Lake Superior. It amalgamated with Port Arthur and the townships of Neebing and McIntyre to form the city of Thunder Bay in January 1970. Since then it has been the largest city in Northwestern Ontario. The city’s Latin motto was A posse ad esse (From a Possibility to an Actuality) featured on its coat of arms designed in 1900 by town officials, “On one side of the shield stands an Indian dressed in the paint and feathers of the early days; on the other side is a French voyageur; the center contains an elevator, a steamship and a locomotive, while the beaver surmounts the whole.”

19th century and after
Two townships (Neebing and Paipoonge) and the Fort William Town Plot were surveyed in 1859-60 by the Province of Canada’s Department of Crown Lands and opened to settlement. A large section of land adjacent to the Hudson’s Bay Company post remained in dispute until 1875, when it was surveyed as Neebing Additional Township. Most land was acquired by absentee landowners, with speculation built on the decision of the new Dominion of Canada to build a railway to the Pacific to begin somewhere along the north shore of Lake Superior. The selection of the Fort William Town Plot (later known as West Fort) as the eastern terminus for the CPR stimulated development, as did the construction of the railway begun in June 1875. The federal Department of Public Works, and later the Department of Railways and Canals, took seven years (1875–1882) to build the Thunder Bay Branch from Fort William to Winnipeg, Manitoba.

The Ontario Legislature incorporated the Municipality of Shuniah in March 1873. This early form of regional government comprised a vast area from Sibley Peninsula to the American border. For eight years the residents of Neebing and Neebing Additional townships battled Port Arthur residents for the Thunder Bay terminus. In March 1881, the inhabitants of Neebing and Neebing Additional petitioned the Ontario Legislature successfully to separate the southern townships from Shuniah and to create the Municipality of Neebing.

By 1883-84, the Montreal-based CPR syndicate, in collaboration with the Hudson’s Bay Company, clearly preferred the low-lying lands along the lower Kaministiquia River to the exposed shores of Port Arthur, which required an expensive breakwater if shipping and port facilities were to be protected from the waves. The CPR subsequently consolidated all its operations there, erecting rail yards, coal-handling facilities, grain elevators and a machine shop. In April 1892, Neebing Additional Township and parts of Neebing Township were incorporated as the Town of Fort William. Fort William was incorporated as a city in April 1907. The City of Fort William ceased to exist at the end of December 1969.