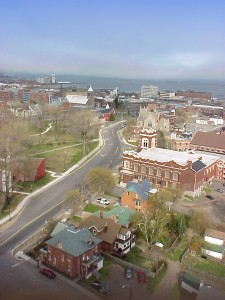 The government of the Province of Canada was determined in the late 1850s to begin the exploration and settlement of Western Canada. With Confederation in 1867, Simon James Dawson was employed by the Canadian Department of Public Works (DPW) to construct a road and route from Thunder Bay on Lake Superior to the Red River Colony. DPW’s depot on the lake, where it landed and stored its supplies, acquired its first name in May 1870 when Colonel Garnet Wolseley named the tiny fire-ravaged[1] settlement Prince Arthur’s Landing in honor of Prince Arthur, Duke of Connaught and Strathearn (1850–1942), son of Queen Victoria, who was then serving with his regiment in Montreal. In 1871 the Ontario government surveyed the Prince Arthur’s Landing Town Plot, thereby officially confirming the name and opening the land for legal possession. The Prince did not “land” in the settlement until May 1890 when he and his entourage briefly stopped in the town. In May 1883 this unwieldy name was changed unilaterally by Canadian Pacific Railway (CPR) officials in Winnipeg to Port Arthur.

The inhabitants of Prince Arthur’s Landing were the driving force behind the creation of Thunder Bay District’s first municipality, the Municipality of Shuniah in March 1873, an early form of regional government which stretched from Sibley Peninsula to the U. S. border. Landingites dominated Shuniah to the furor of the few residents of Fort William, Ontario until the people of Fort William successfully established their own Municipality of Neebing in 1881, and began a long and successful battle with Port Arthur to secure all the operations of the Canadian Pacific Railway.

Prospering from the CPR railway construction boom of 1882–1885, Port Arthur was incorporated as a town in March 1884, one year after acquiring its new name. The CPR erected Thunder Bay’s and western Canada’s first terminal grain elevator on the bay in 1883, although it later leased it to Joseph Goodwin King. The end of CPR construction along the north shore of Lake Superior and the CPR’s decision to centralize its operations along the lower Kaministiquia River brought an end to Port Arthur’s prosperity. Silver mining had been the mainstay of the economy for most of the 1870s. The silver mining boom of the 1880s came to an end with the passage by the U.S. Congress of the McKinley Tariff in October 1890. The town was in dire economic straits until 1897–1899 when the entrepreneurs William Mackenzie and Donald Mann acquired the Ontario and Rainy River Railway and the Port Arthur, Duluth and Western Railway, and chose Port Arthur as the Lake Superior headquarters for the Canadian Northern Railway. Port Arthur thrived as a transshipment and grain handling port for the CNR after the railway line was opened to Winnipeg in December 1901.

From 1871 onwards Prince Arthur’s Landing, then Port Arthur, was the administrative centre for Thunder Bay District (created 1871 by the Ontario government). A provincial stipendiary magistrate dispensed justice until 1884 when a judicial district was created and a federally appointed judge took over. The province erected a jail and court house in 1876, and located a Crown Lands Agent, a Crown Timber Agent, and an Inspector of Colonization Roads in the town. The federal Indian Agent was also usually located in the town. A large new courthouse was erected by the province in 1924.

Attempts in the period 1901–1914 to secure manufacturing industries came to naught, except for the Western Dry Dock and Shipbuilding Company, later called the Port Arthur Shipbuilding Company or PASCO, which was a major industrial employer for many years. However, the forest products industry played a significant role in the town’s economic life. Lumbering operations in Thunder Bay District were often directed by men resident in the city. To sawmills were added the pulp and paper industry in 1917 with the establishment of the Port Arthur Pulp and Paper Company, later a division of Provincial Paper Mills Ltd, and in 1920 the Kaministiquia Pulp and Paper Company at Current River, sold in 1922 to the Consolidated Water Power and Paper Company of Wisconsin Rapids, Wisconsin.

The absorption of the Canadian Northern Railway into the Canadian National Railways meant the loss of many CNoR facilities, as the Canadian Northern route through Port Arthur was downgraded by the new CNR. However, increasingly, western Canadian grain companies preferred to build their large new terminal grain elevators on Thunder Bay rather than on Fort William’s Kaministiquia River.

Lakehead University was established on a site within the former city of Port Arthur. And Port Arthur’s intercity area increasingly became a focus of industrial and commercial activity in the post-war period.

Port Arthur became a city in April 1907. The City of Port Arthur ceased to exist at the end of December 1969.